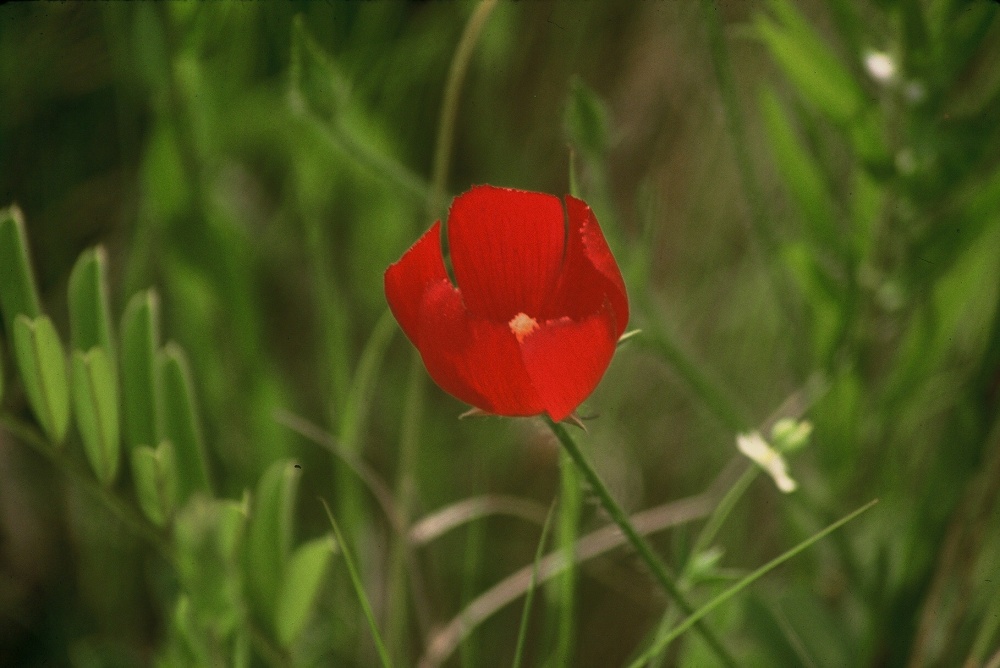 May is a transitional month in the prairie, but it is a great month for sunflowers and milkweeds and many other species. The last of the Louisiana irises bloom—the short and zig-zag stemmed Iris brevicaulis. May presents a 3 feet tall prairie in general and reaching 4-5 in select species. Some meadow scenes are roughly 2 feet in height and provide some of the most striking view—such a section should be provided in any prairie garden not only for the sake of your eyes and emotions but also in order to provide a habitat that many of these shorter plants can be maintained—this area can be mowed after the major blooming (mid-June to early-July) and a reasonable amount of re-blooming may result in a second splash.

May also provides many views from the recent April blooms and some from the upcoming June explosion of blooms—this is why I call it a transitional month. At first view, May appears to have far fewer blooming plants, but this is a result of the loss of large, spectacular bloomers followed by their replacement with many small bloomers including Phlox, Callirhoe, Echinacea, etc. Taller plants from the April blooms often hide the smaller bloomers from view and reduce the overall effect. Thus growing a meadow without the large Baptisia and other plants of April will provide for a view of these beautiful prairie gems.

Creating a meadow is one of the best ways to get into the prairie. Here is an excellent example of a May meadow using 20 species of prairie plants in an area that can be mowed in mid-June with some good rebloom, and maybe another mow in mid-August for another small rebloom. The list contains showy flowering plants that are generally easy to grow after seeding or transplanting; however, they are not commonly regarded as hosts for butterfly larvae and serve mainly as nectar plants for pollinators. The exception is the milkweeds, but Monarch larvae are usually absent from our area in June, July and August, when mowing is suggested—a patient search might be useful just in case there is a straggler!

A list of 20 dry feet meadow choices to make a May ‘knock your eyes out view’ follows:

Phlox, Callirhoe, Mimosa and Echinacea collected together make a great show. Add black-eyed susans and beebalms, and the view is as gardenesque/meadowesque as it gets. Add Mamou and Butterflyweed and you have a knock-your-eyes-out view. Unfortunately Coreopsis and many Tradescantia are generally finishing. A few Coreopsis tinctoria may bloom, but these annuals tend to disappear. Silphium gracile, although a bit taller but airy, can make a great contribution to the view. Tephrosia onybrychoides (Multibloom hoarypea) and Gaura lindheimeri (Lindheimer’s beeblossum) also bloom profusely. Cassia and Passiflora may be added as they are wonderful butterfly host plants—but cutting these down at midseason would be detrimental to the varied sulphur butterfly caterpillars and Gulf Fritillary caterpillars feasting on them.

Adding Lantana to this garden would also provide addition bang for your bucks. Arguments regarding whether the various kinds are native or exotic have not been settled. They do not appear to be common in the wild, but they are here and there. They were not found on the prairie remnants, but I have seen them in roadside areas along with natives; thus they are naturalized exotics at worst and possibly natives at best. I grow them with stem cutting taken in winter and simply inserted into the soil—I am always surprised to see them take root and grow.

Prunella vulgaris (Heal-all) and Scutellaria integrifolia (Helmet flower or skullcap) may be excellent additions. They are striking and blue to purple flowering, low growing plants. They are absolutely beautiful and rival the bluebonnets of Texas in both color and length of bloom season, but I have never seen them in nearly the numbers evidenced by the countless pictures of bluebonnets. They bloom briefly between in April to May.

Chamescrista fasciculata (aka Cassia and known as Partridge Pea) and Tephrosia are peas with characteristic blooms, but Chamescrista is an annual with bright yellow flowers, and Tephrosia is a perennial with white flowers that turn pink and then red during the 3 days that each bloom survives. These can become abundant and persist; Cassia is able to persist in the garden for years—not a common feat for annuals in the prairie—a habitat where perennials tend to crowd out the annuals. These will bloom for the next 5 months, if they have an opportunity in their location.

Spiranthes blooms. Orchids always receive attention—not only the most varied group of flowering plants in the world but also the most striking. The orchids occur in most kinds of habitats and achieve an intimate relationship with specific insects and fungi. Ladies tresses are among the most weedy of the orchids, but I would not want them thought of as weeds—they are native and highly sought after by pollinators. They are striking in their morphology and never cease to tease you into thinking there must be a dozen kinds as the number of twists and turns in the spiral orchids are bedeviling. Transplanting any of the orchids is literally an attempt to achieve a sense of deep depression and event-driven loss of common sense.

The mints, Monarda (beebalms) and Pycnanthemum (mountain mints), make a great show in May. They are very aromatic and tasty—a pleasure to other senses in the midst of all this visual beauty. The flowers are white to pink—2 species of each genus bloom in May(M. lindheimeri and M. fistulosa and P. muticum and P. tenuifolium), but another species in each genus will bloom in August and September. The latter blooms of August are P. albescens and M. punctata. The smells vary from camphor-like to peppermint to spearmint and other minty smells companioned with tastes. These plants contain essential oils that are toxic to many bacteria, and as such are considered medicinal plants. While some remind me of medicine, others have very pleasant smells and tastes. Other tasty plants include the Sweet goldenrod (Solidago odora) with a distinctively licorice taste and smell—it blooms in August.

The milkweeds are my joy in May—they bloom as though there is no tomorrow. An essay on milkweeds was blogged earlier.

A wet marsh south of Kinder with Helenium drummondii (Fringed sneezeweed) in the 1980s.

Helenium drummondii (Fringed sneezeweed) blooms in profusion in wet areas in the remnant prairie, but it has never been well-established in our gardens. Other plants that enjoy wet prairie include Physostegia intermedia and Pontedaria cordata—both remain in the garden, but they are not flourishing. Lots of other plants, including the candyroots and several carnivorous plants, are common in the prairies, but have not established in the gardens.

By the end of May, few pollinators remain. The causes may be many, but I suspect that the overhead activity of cropdusting airplanes and their drifting insecticides and herbicides are among the major causes for this drastic decline. As a result, few seeds are produced—most notable to me when examining the milkweeds. By summer’s end, the pollinators have returned.

May includes Mother’s Day, with the peak bloom of daylilies and gladiolas in the conventional southern garden. In the Cajun Prairie Gardens, I have used daylilies (Hemerocallis) as accent plants in some of these meadows—exotic plants are not generally recommended. Daylilies bloom from April to July in the Cajun Prairie Gardens. Unlike the Midwest, where daylilies have become somewhat weedy and escaped, in Louisiana, these plants appear to not be an escapee problem. Because the plants are beautiful, edible and highly useful to the gardener, I choose to use these plants. The plants respond well to mowing in summer and burning in winter. Their varieties are nearly inexhaustible, both in form and color. Also on the non-prairie view, May provides an explosion of zinnias and cosmos for my and my butterfly’s pleasures—these pleasures extend into September and further if weather permits. 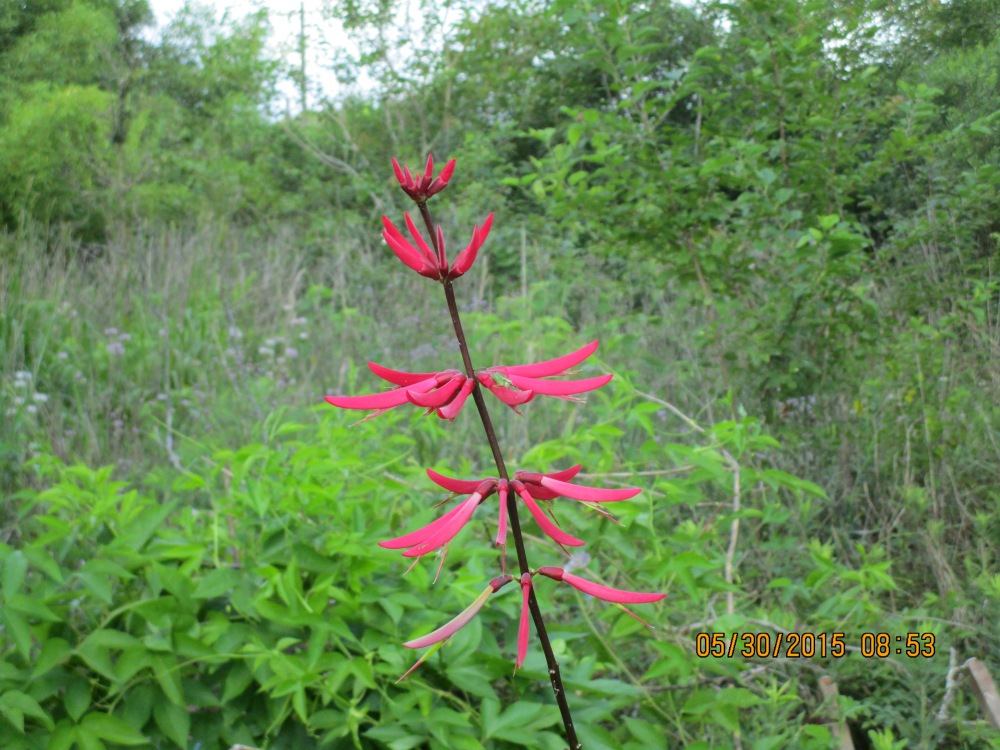 The native herb Mamou in all of its glorious bloom. This hummingbird-pollinated, medicinal plant has a root system like a tree and is more commonly found in the edges of the gallery forests and prairie, but it is a great grower in the Cajun Prairie Gardens. The plant is celebrated in a book by Bill Reese and Charles Allen. The chemical in its seed and roots is a blood thinner, which my Mom used in a syrup to act as an expectorant and phlegm-buster–now considered too dangerous to use. Photo requested by Terry Erwin.

The month ends with the first blooms of Hibiscus moscheutos var. lasiocarpos (Crimsoneyed rose-mallow)—a plant that takes over the view in the Louisiana Iris marsh during June and July. Ipomoea sagittata (Salt marsh morning-glory)—a beautiful blue-purple-flowered vine grows among the Hibiscus. Masses of Ludwigia spp. (Water primroses) grow and bloom bright yellow open blooms beneath the Hibiscus and the morning-glories.

A preview of the marsh in the Cajun Prairie Gardens in June. More than a thousand Hibiscus bloom. The yellow flowers in the foreground are Ludwigia sp.

What was blooming in the Cajun Prairie Gardens on May 1, 2015?

https://www.youtube.com/watch?v=Gl5wzHjzvMk WOW! Great video. Thanks to Larry Allain for passing it along to me!