Finger false-dragonhead along a roadside.

June is a 4 to 5 foot tall prairie with some areas reaching 6 feet. June begins as an extension of the May blooms, and it takes a week or so to take on its own personality. Hibiscus explodes in the wet prairie. Extraordinary blooms of 5-6 inches and varying from red to white. Two species, Texas star (Hibiscus coccinea) and our common species, Crimson-eyed rosemallows (Hibiscus moscheutos lasiocarpus), occur in the prairie ecosystem. Kosteletskya virginiana (Seashore mallow) blooms in mid-June and sporadically until September—it is a marsh plant and uncommon in prairie wet areas; however, it is a great garden plant. Texas star and Seashore mallow in my garden are from a backwater of the Calcasieu River near Westlake, LA, where Avery Williams guided me to a beautiful marshy area, where not only these flourished but also a huge population of Physostegia intermedia—the Spring-bloomer. Physostegia digitalis blooms in the dry prairie and creates a beautiful show in June and early July.

Mid-month is the beginning of the blooming of Physostegia digitalis (Finger false dragonhead or Obedient plant). This extraordinary bloomer is unmistakable. As the most common of the summer-blooming Obedient plants (there are 3 others that bloom in the summer), an estimated 5000 plants bloom in the Cajun Prairie Restoration Project in Eunice, with maximum bloom around the 1st of July. Nearly a hundred plants are found in the Cajun Prairie Gardens. This particular Obedient plant prefers drier areas, while others prefer wetter sites.

The Hibiscus and Physostegia make such a great show in June that it is worthwhile to examine more closely their blooming regimen in a table. Both maximize their bloom at the end of June and the beginning of July, marking mid-year in the garden.

Table 1. Blooming of Hibiscus moscheutos lasiocarpus (in the wet prairie) and Physostegia digitalis (in the dry prairie) for the year 2015 in the Cajun Prairie Gardens as a percent head count of number of plants flower on a particular day. There are about 500 Hibiscus and 100 Physostegia in the gardens. Note that sporadic blooms occur on plants during the rest of July, with some Hibiscus reblooming in September (especially if cut back after blooming).

The wet marsh also is home to Ipomoea sagittata (Saltmarsh morning-glory) with violet flowers and Ludwigia spp. with bright yellow flowers, both spreading vigorously and vining among the Hibiscus. These plants will bloom until September. 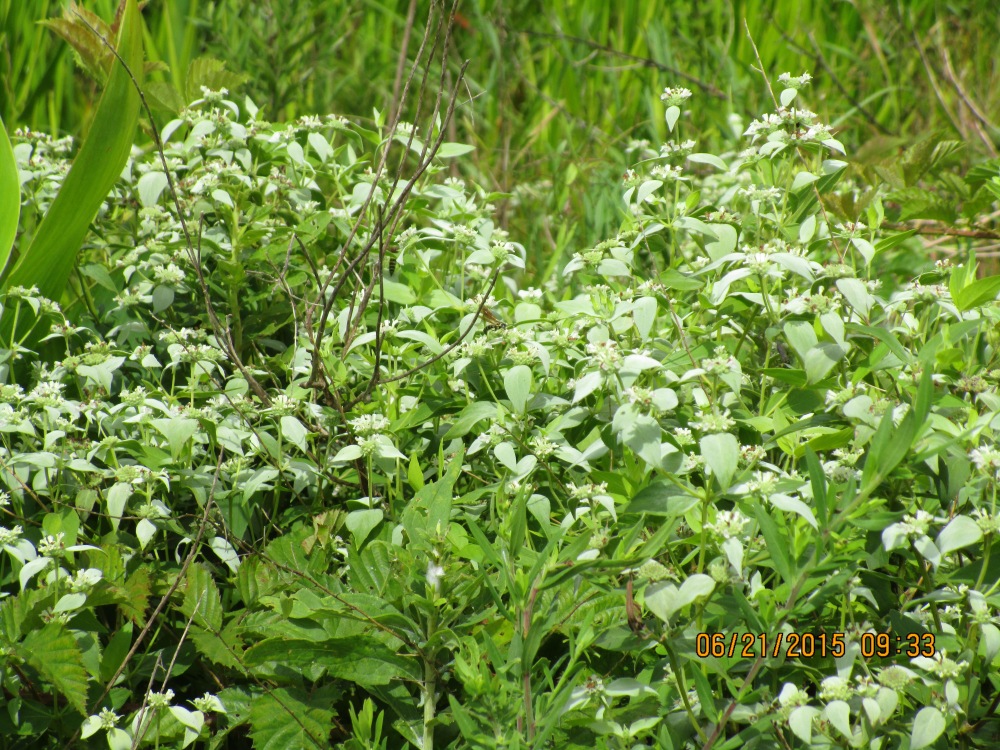 The mints, Pycnanthemum muticum and P. tenuifolium (Mountain mints) companion the last of the blooming Monarda lindheimeri and M. fistulosa (Bee balms) to add to the blooms of the Physostegia. The mints generally prefer drier prairie sites, but they are not as picky as the later blooming species, P. albescens and M. punctata. All of these mints smell great and taste good or they taste like medicine. Crushing leaves and smelling them is a gret past-time, but during June, the blooms add significant white to the color spectrum in the dry prairie. The later blooming species are more yellow in color and make themselves noticeable in August. 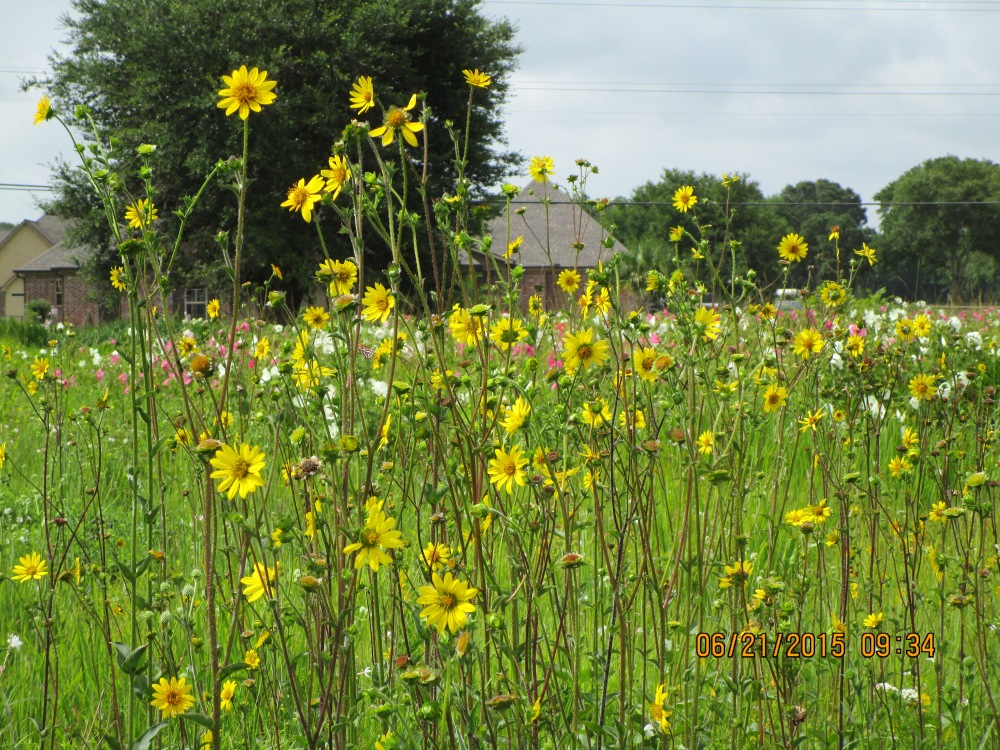 Silphium gracile (Rosinweed) provides maximum bloom, while S. laciniatum (Compass plant) begins to shoot up to 6-8 feet and readies to begin blooming near the end of the month.

Mid-June is the onset of bloom for Platanthera nivea (Snowy orchid). Whereas this orchid blooms profusely in savannahs of western Louisiana, it is rare in the Cajun Prairie. I found and photographed a single specimen in bloom just north of the intersection of Hwy 165 and Interstate 10 along a Jefferson Davis Parish railroad right-of-way remnant prairie seepage area. Like many of the orchids, one walks right over them all year long as they typically have grass-like leaves that blend into the maze of grasses. Only when the blooms appear are the plants obvious, and in this case a really obvious bright white spire of blooms.

A view of the South Fenton remnant prairie in June of 1988. The large circles of grasses in the background are mostly Big Bluestem, while the foreground is dotted with blooms of Rough coneflower. 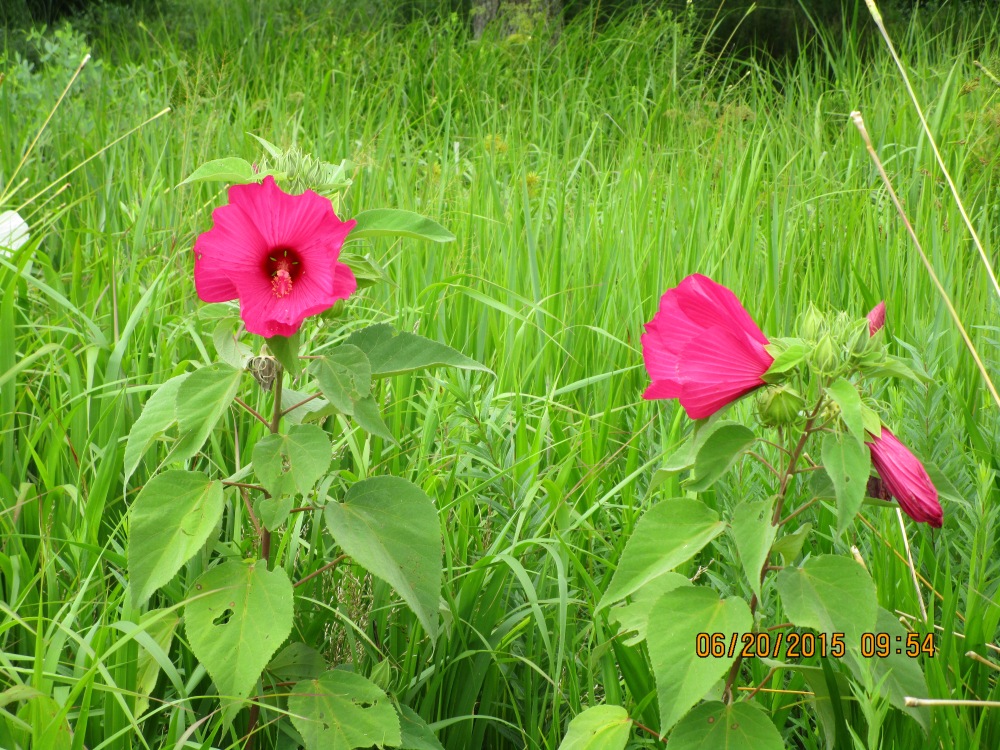 What was blooming in the Cajun Prairie Gardens on June 1, 2015?